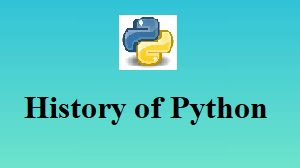 Python is a fairly old programming language whose design originally began in late 1980 and was first released in February 1991.
The founder of the Python programming language is Guido Van Rossum. Python was developed in Netherland.
The name Python was given because Rossum was a big fan of a comedy circus named “Monty Python’s  Flying Circus”.
In 1994 the first version 1.0 of Python was released with new features that consist of lambda, map, reduce and filter.

After Python was released in 1994, Python has upgraded itself multiple times by adding new features and extensions for the need and the ease of programmers.
Below is the list of Python Programming Updates along with its release date since it was first released in 1994.